The latest version of the Street Audit is available as a PDF download:
The Continuing Covent Garden Renaissance

Proposals for Immediate Action
This Appendix lists, and shows the responsibility for all the actions to improve the streets in the study area which can be taken immediately. The proposals embody the policies set out in the body of the report, but to enable this Appendix to be used for action, without cross reference, we set out first the specific policy assumptions on which it has been prepared.

General Philosophy on Clutter
We believe that the atmosphere of lively bustle is part of the special character of Covent Garden and it would be unwise as well as impossible to attempt to alter this. We also believe, however, that the clutter associated with this activity should not be a permanent feature of the area. At quiet times it should be possible to appreciate the historic buildings in an open setting.

PUBLIC OUTDOOR SPACES
1. Lamp posts
Traditional fluted lamp posts in their current positions should be painted black. All signs except “no waiting” signs should be removed immediately. Hanging flower basket brackets will be removed when no hanging baskets are attached.

2. “No waiting” signs
Some (no waiting) “at any time” signs are fixed to specially provided posts. In nearly every case the signs in an alternative (portrait) format can be fixed to an adjacent bollard.

4. Parking meters
Parking meters in Henrietta Street and Southampton Street should be replaced by a single ticket machine. The machine should be sensitively located to fit in with the streetscape.

6. Redundant iron bollards
Several iron bollards are positioned at corners. Most appear to have been positioned to protect pedestrians from vehicles. They are now redundant and (unless there is an historic reason for keeping any of them) they should be removed to more appropriate sites.

8. Traditionally designed wooden bollards and fences
These should be exclusively used to deter traffic in the current arrangement only. Iron bollards are not necessary in the Piazza area and unless there is an overriding historic reason for keeping individual street bollards in their current position, they should always be removed. The fence arrangements at each corner of the Piazza needs to be redesigned as shown on the plan on page 6. On the north side of the Market the fences could be repositioned to act as boundary markers for the outdoor seating areas to the cafes. (Only as they are currently arranged).

9. Litter bins
There are more than three styles of litter bin in the area. Most should be removed. There probably is a need for bins near the current take-away food outlets. These should be positioned within the private floorspace or forecourt of the outlets only. One style of bin is needed for those which remain in public places.

10. Salt box
There is one salt bin in the area. It should be removed and salt/grit delivered by vehicle.

11. Re-cycled waste bins, 10 No. north side of market
The bins give a decrepit air to this side of the Market building and are in full view of the public, whatever the economic or convenience arguments. They should be removed from sight or replaced by an off site, internal rubbish compactor or underground facility. (Kensington and Chelsea operate segregated bins at the rear of refuse vehicles, encouraging sorting inside buildings).

12. Wooden benches
The majority of benches at the northwest and southwest corners of the Market should be removed/relocated to sites as shown on page 6.

13. Flower stall, north side of market
The existing stall position, supplied with a discreet electrical supply, although a temporary location, is intrusive and could be more attractive. It could be a more traditional design better aligned to the facade.

14. Phone boxes
There are two groups of BT phone boxes, at the southern end of James Street and at the western end of Russell Street. The James Street boxes cause an obstruction and should be removed. There may be an opportunity to position a traditional red box nearby. It should be positioned with care in relation to the adjacent buildings. Discreet signs on the box could direct customers to other phones. The Russell Street boxes cause less obstruction at present, but should be removed when the Royal Opera House site is redeveloped. Again one traditional box carefully positioned on the footway could indicate where others can be found. Other phones should have minimum housing and could be relocated in discreet positions, for instance on the inside of arcade columns.

15. Service Boxes
Phone switch boxes and other control boxes should be painted black, re-sited and faced with ribbed mouldings to discourage flyposting. Wherever possible control boxes should be placed underground, on a rising gear system when access is needed for maintenance. (A French made product design is now available from Sugg Lighting Ltd. Tel: 01293 540111).

16. Outdoor tables and chairs for cafés and restaurants
Outdoor chairs and tables should be restricted to areas chosen to relate to the original architectural features of the surrounding buildings. For instance, on the north arcade, within the covered area of the arcade. If tables are permitted beyond the arcade and Market in the roadway, they should be positioned to respect the alignment of the columns of the arcade at the north of the Market. At the west side of the Market, tables and chairs should be restricted to two symmetrical areas either side of a centre line from St. Paul’s Church to the centre of the Market. Existing areas at the north side of the Market Building should be phased out. In the interim chairs and tables should extend to respect the bays of the Market Building and be contained within the existing wooden fences (to be removed as part of the reduction in clutter). Where chairs and tables are permitted outdoors, they should be removed at all times when the premises are closed.

19. Planters/dividers at cafe outdoor seating areas
All planters and other inappropriate dividers should be permanently removed. Boundaries of outdoor cafes should be marked only in accordance with Westminster City Council guidelines. It is assumed that operators will be willing to provide additional staff to manage queuing, customer security, orderliness of table and chair layout and bill payment as a contribution to improved overall standards.

20. Pigeons
Pigeons should be discouraged by regular local campaigns against feeding and by physical measures, organised by traders and frontagers in conjunction with the City of Westminster’s Environmental Health Officers. Pigeons should be deterred from roosting on ledges above restaurant chairs and tables, in the Market, under the arcade (north side of Piazza). Sparrow Hawks are used in the Market Buildings (contact Covent Garden Market Management) and spring wire systems are available from most Pest Control firms.

21. Car parking
No cars should be permitted to be parked in the enclosed Market area. Deliveries need only take place before 10.00 am and after 9.30 pm. No parking bays should be provided adjacent to the Market Buildings.

22. On-going maintenance etc. of external spaces
Cleansing of streets and external spaces, litter and rubbish clearance, parking control, physical maintenance, control of street traders and entertainers: there needs to be one management authority to deal with these five functions for the whole of the central Covent Garden area (as agreed with the City of Westminster). The managed area could be the current pedestrian area inside the wooden gates, with immediate effect. GP are only responsible for part of this enclosed area at present. An agreement between GP and the City of Westminster should be reached whereby, for a full consideration, responsibility for these functions is taken on by GP, In the future such an agreement should extend to any new boundary of the market area, caused by an extension of the pedestrian area.

23. On-going maintenance of semi-public areas
(A) Royal Opera House site
Visitors only get an impression of Covent Garden as they actually see it. They cannot be expected to know what improvements are likely to take place in the future. (It is good for public relations to have a suitably well presented display panel of future proposals on public view). The situation should be compared with vacant shop units in a purposely designed shopping centre. The units would be boarded up tidily, possibly with a decorative design so that they appear part of a thriving centre and an asset to the whole area until a new tenant takes possession. Rubbish should be removed. Fences should be repaired. Soft landscape and paving should be kept in good condition with regular clearance of litter and rubbish.

(B) Scottish Widows site, Bedford Chambers Arcade
The structure of the building is interesting and tidy above first floor. Improvements are however desirable, particularly under the arcade. Litter has been allowed to accumulate under pavement grilles and should be removed. Pigeons nest on the floodlights and cause droppings next to the tables. The lights need to be repositioned and made pigeon proof. Wiring to the recently-added installations needs to be repositioned out of sight. Outdoor chairs and tables should be limited to the area under the arcade. Areas currently licensed by the City of Westminster on the Piazza (beyond the arcade line) should not be relicensed when they are reviewed for renewal. Planters and umbrellas should be removed. Service counters and waste bins should be removed when the restaurants are closed.

A NOTE ON THE FOLLOWING SCHEDULES
These “Street Audit” schedules were first produced in 1994 and may therefore include discrepancies with conditions today. They have been retained because the format and some information remains valid. Indeed the schedules demonstrate just how many items of damage, poor maintenance and redundant clutter, can be left for years, even in a Conservation Area of outstanding historic and visitor importance.

A specially enlarged and detailed section has been included to cover the state of the arcade of Bedford Chambers. This work was in part prepared and illustrated by the CGAT’s own professional expertise. It gives an indication of the high degree of detail design specification and maintenance necessary to sort out an accumulated mess.

At the time of writing, it is understood that the Rock Garden’s application for improvements, including some reductions in sign and other clutter, has received consent. The CGAT hopes that this clutter reduction will be implemented and that others in the arcade and throughout the area will also wish to apply the principles of this document. 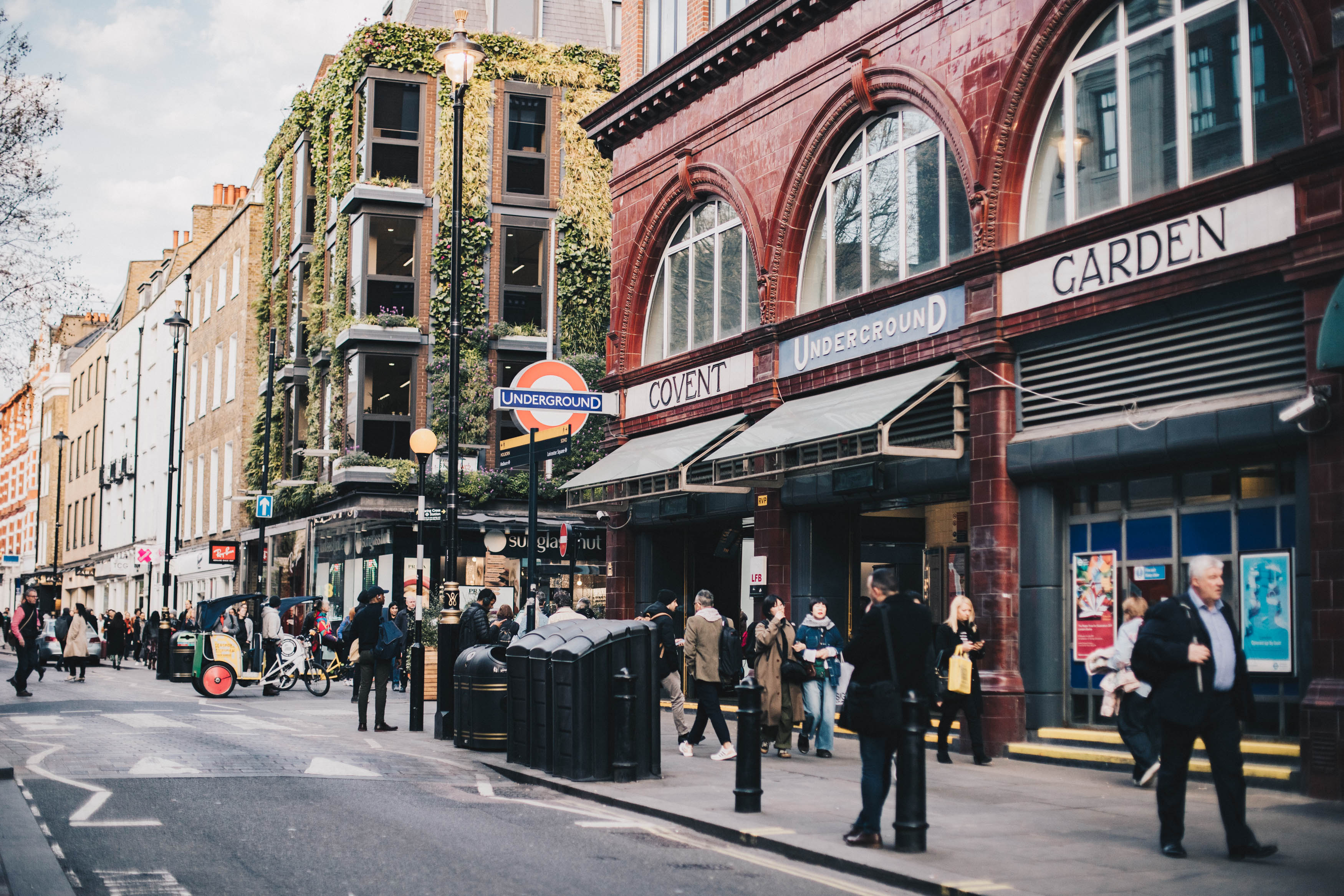