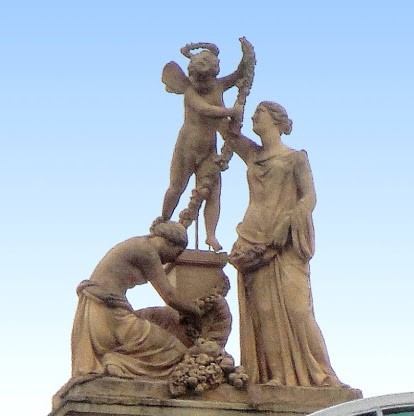 A striking sculptural group, which has been missing from its position on top of the Central Market in Covent Garden for several years, has been restored to its rightful place.

The group, featuring the goddess Flora, is by the famous engraver and sculptor, R.W. Sievier who lived between 1794 and 1865. It was erected in about 1830 as part of Charles Fowler’s design for the Market Building and was paced on the east pediment of the central range, above the Opera Terrace and overlooking the Royal Opera House.

At the time, W.G. Adam, the fourth Duke of Bedford’s Chief Agent, said: “Mr Sievier’s Group is very pretty and well composed and perfectly classical but I think it would be better without the votive Deity which may give rise to observations and discussions.”

Robert William Sievier, engraver, sculptor and later inventor, showed an early talent for drawing, and attended the Royal Academy Schools from 1818. His speciality was portrait engravings, but by 1823, he had abandoned engraving for sculpture, where again his forte was portraits, these including Prince Albert and Thomas Lawrence, among others.

Sievier, whose studio was in Henrietta Place near Cavendish Square, exhibited at the RA from 1822-44, including several busts, and a few ideal figure subjects. His oeuvre also included several gravestones and monuments.

The Sievier monument, a monument to himself, is in the Colonnade in Kensal Green Cemetery, and also there by Sievier is a statue of a girl under a cupola, to John St John Long. His most important statue is that of Jenner in Gloucester Cathedral where there is also his bust of George Paul; another statue is of Charles Dibdin, at Greenwich. His bust of Sir Thomas Lawrence can be seen in the Soane Museum, and further portraits include William Harcourt (Stanton Harcourt Church, and St George’s Chapel, Windsor Castle), and a bust of Silvester in the Old Bailey.

The Covent Garden group is made of Coade stone, an artificial but hard-wearing stone invented by a Mr Coade in 1769 and produced in a factory in north Lambeth. After his death, his wife Eleanor carried on the business until her death in 1821 when the family business was carried on by her relatives until 1840 when the company ceased to trade.

Mrs Coade managed to get many well-known sculptors to use her material including Flaxman (Tragedy and Comedy on the Royal Opera House, Covent Garden, Mineroa on the east façade of the National Gallery), William Croggan and John Bacon. Many other examples of Coade stone still exist such as the Lion on the south bank of Westminster Bridge and the statues outside the John Soane Museum.

Coade Stone is an easily-moulded acid and frost resistant, hardwearing, weatherproof product and it seems likely that one of the ingredients of the Coadefamily’s “secret formula” was Cornish white china clay. The grindstone used in preparing the clay and numerous moulds used in preparing stock figures were uncovered during excavation for the foundations of the Royal Festival Hall.

Many of the figures were cast from models sculpted by John Bacon and a great variety of allegorical and mythological figures were made by modifying stock figures. Coade stone products were widely used by eminent architects for the greater part of a century, but financial difficulties eventually brought about the close of the business and the formula for the stone was lost, apparently forever. It was widely rumoured that the lion topping the Goding’s Lion Brewery building contained the formula for Coade Stone, but in 1951 the building was demolished but no formula was found!

Despite its hard-wearing qualities, about five years ago the group was removed from its Opera Terrace position by the Market’s then owners, Scottish Widows, for renovation and the Covent Garden Area Trust has been ever-vigilant in pressing for its return. The Trustees were particularly concerned when Scottish Widows sold its property portfolio in the area to Capital & Counties but were pleased to be reassured that the intention was to return it to the Market this autumn. 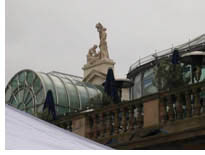 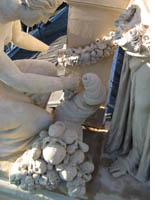 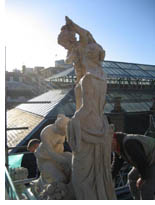 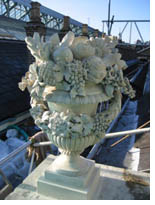