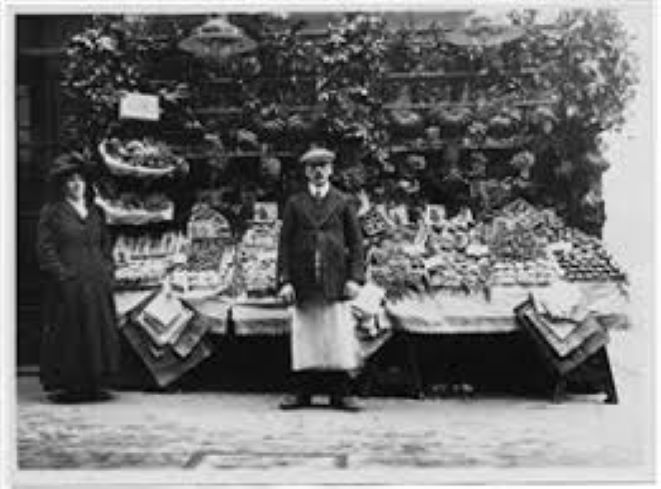 Despite Covent Garden’s much-documented long history, there are still people today who are unaware of its association with an actual market where fruit, vegetables and flowers were sold for nearly 150 years, until as recently as November 1974.

Back in 2003, Sheila Springer, whose late husband Barry’s family were traders, contacted the Trust with an idea for commemorating her husband’s family name. Barney Springer Limited was founded in the late 19th century and one of the market’s largest companies and was situated in Floral Hall, Russell Street Corner (which is now Tutton’s restaurant) and the Jubilee Hall.

Sheila remarked how she had been horrified when someone in the Admin department of the Royal Opera House has categorically refused to believe there had ever been a vast wholesale fruit and vegetable market on the site and said it was undeniable that the expensive move of the market to Nine Elms was the beginning of the end for many long-established family firms. Indeed, the atmosphere and even the characters that had inhabited Covent Garden for generations had simply disappeared. “It seems now that only Pygmalion and Nell Gwynn are left to serve as reminders of this particular piece of London’s history” she said.

With the enthusiastic assistance of the Trust’s former Administrator, Leana Pooley, Sheila’s original idea of some form of memorial began to take shape. A site was identified – the Southampton Street side of the Jubilee Market Hall where resided a curious lump of slate with a bell inset into it – and a bronze plaque depicting a market porter with a stack of baskets on his head was suggested as the ideal memorial to fill the space. Fund-raising began in earnest to raise the £78,000 or so needed, with the assistance of the Worshipful Company of Fruiterers (celebrating its 400th anniversary in 2006), and sculptor Glynis Owen Jones was commissioned to do the work. One of the main fund-raising ideas was for companies and individuals to pay £3,000 to have their names inscribed on the “baskets” running down each side of the plaque.

Planning permission was obtained, the site cleared and lighting arranged and finally, on October 21st 2006, the 13ft by 61/2ft bronze relief plaque was unveiled at a ceremony watched by members of the Worshipful Company of Fruiterers, former market traders, residents of Covent Garden, Trustees of the Covent Garden Area Trust and interested passers-by.

The actual unveiling was performed by Mr Nobby Price, a fifth generation market porter, while speeches were made by the Lord Mayor of Westminster, Cllr Alexander Nicoll (who is also a Trustee of CGAT) and the Master of the Worshipful Company of Fruiterers, Mr Will Sibley. After the ceremony, the guests adjourned to the now doomed Theatre Museum for a reception hosted by the new landlords of the Market and surrounding properties, Capital & Counties, whose Managing Director, Mr Ian Hawksworth, was also present. 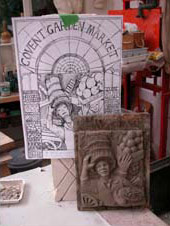 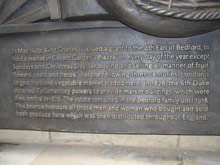