A Look Back at Covent Garden's History

Any trip to London would not be complete without a visit to Covent Garden. In fact, for many it is the most memorable of the London experience. The name is a corruption of ‘convent garden’ where historically the monks of Westminster Abbey would have grown their vegetables.

Just a few minutes’ walk from the bright lights of Leicester Square, we find the narrow gas lamped streets that lead to what is known as the Piazza. Much of it was designed by architect Inigo Jones in 1631 as a residential square for aristocratic and wealthy inhabitants. The style was of the grand Italian Piazzas he had witnessed on his visits to Italy. With large colonnaded town houses on three sides and an imposing ‘Tuscan’ style church on the west, which he described as the “finest barn in London”.

The Piazza was revolutionary, being the first of its kind in England. Unfortunately, no original buildings survive apart from the church which was mainly destroyed by fire in 1795 and rebuilt. The layout is much as it was 400 years ago. 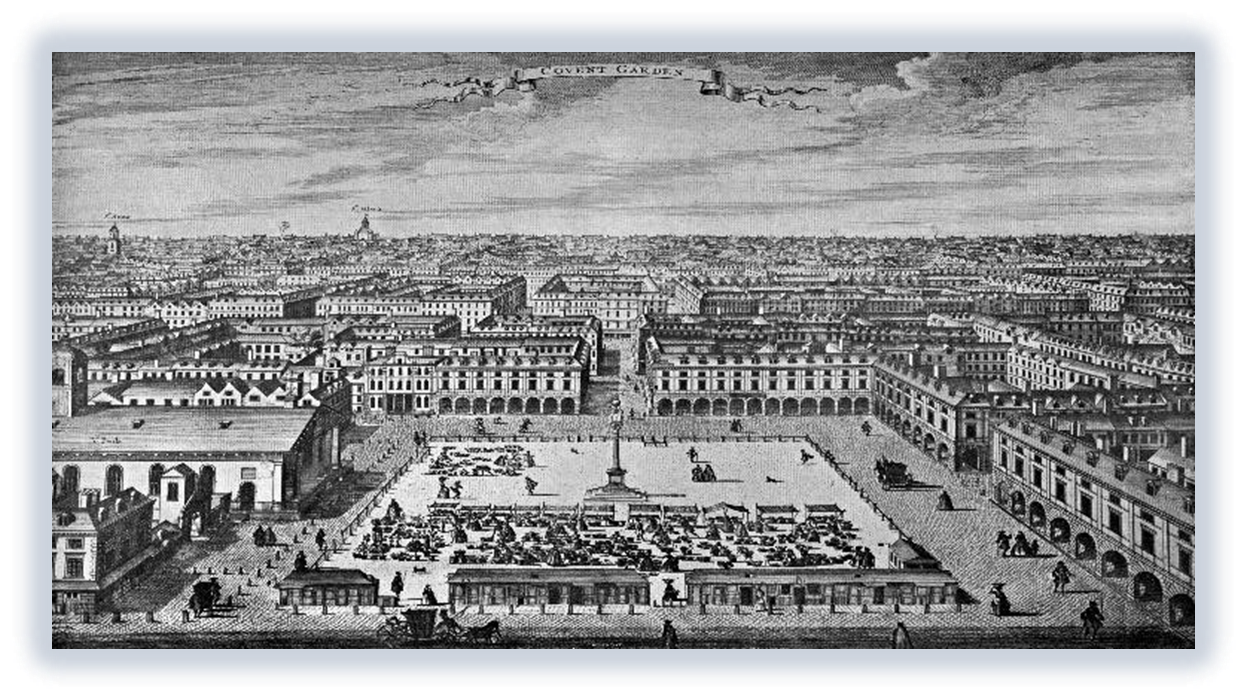 The church of St. Paul’s, with its imposing Tuscan pillars overlooking the West Piazza is widely known as the ‘actors’ church. This is due to its long association with the theatre. The interior walls are full of memorial plaques dedicated to famous theatrical personalities, including Charlie Chaplin, Noel Coward and Vivien Leigh. 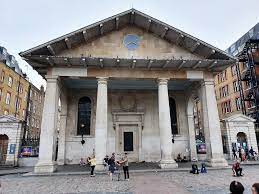 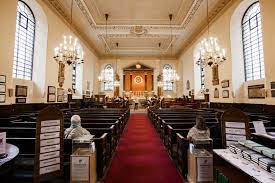 Covent Garden is the epicentre of London’s theatre district and there are no fewer than 13 theatres within walking distance from the Piazza, including two opera houses. On 9th May 1662 Samuel Pepys recorded in his diary “an Italian puppet play being performed under the portico”, possibly a forerunner of what we now call Punch and Judy. Interestingly, the entrance to the church is not under the portico, but from the tranquil garden at the west, otherwise visitors would have to enter the church from behind the altar.

The central Market building was constructed in 1830 and designed by Charles Fowler. Its style is neoclassical with granite pillars and four corner pavilions. The building has large north and south halls separated by a central avenue. The glass roof with its cast iron structure was added in 1875.

Around the Piazza the surrounding buildings are mostly 19 Century. To the north stands the imposing Bedford Chambers built in 1879, replacing and echoing the original Inigo Jones design. The north east colonnade was built in 1999 as part of the new Royal Opera House extension. The south east corner has been the home of the London Transport Museum since 1980. The Jubilee Hall and market building, constructed in 1904, dominates the south Piazza.

Where a young Charles Dickens would have walked nearly 200 years ago, hearing the cries of costermongers, street performers and musicians now entertain the throngs of people that are attracted in their thousands to the Piazza every day. The shops in the market building and surrounding streets which once provided fruit and vegetables for London’s tables, now sell an eclectic variety of fashion and lifestyle products.

Restaurants, cafés, and bars are plentiful with much alfresco seating and dining around the Piazza. There are many lovely and historic pubs all over Covent Garden, but none more worth a visit than the Lamb & Flag in Rose Street, dating from 1623 and where the poet John Dryden was attacked by thugs in 1679. 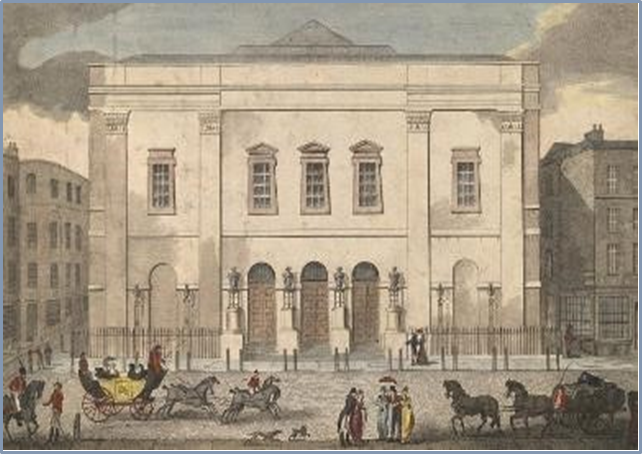 Covent Garden has had nothing but a colourful history. Shortly after the Piazza was completed, market gardeners began setting up stalls on the south side, selling their produce of vegetables from the outskirts of London. Within a few years the market had grown and was encroaching onto the main square. The First Theatre Royal licensed by King Charles II was opened in 1662. The King himself would have secret liaisons there with his mistress Nel Gwynn, who had begun by selling oranges in the theatre before becoming a successful actress. However, the gentry were gradually moving away towards the more fashionable areas that had been built in Soho and St James.

The market continued to expand and the whole area was becoming notorious with an increasingly dissolute night life. The new inhabitants were artisans, writers and actors, who in those days were regarded as ‘low life’s’. Coffee houses had become prolific around the Piazza and surrounding streets, where one could discuss politics of the day or the latest literary works. A less respectable establishment was Tom and Moll King’s coffee house, which was no more than a couple of sheds in front of the church on the West Piazza, where there was much drunkenness and frequent fights. In addition, there were many brothels or Bagnos (Turkish baths) opening in and around the Piazza. The most infamous being the Hummums hotel which dominated the south east corner of the square for two centuries. Jack Harris, the self-proclaimed ‘pimp general of all England’ would promote his business in the very popular at the time ‘Harris’s list of Covent Garden Ladies’, which was published annually from 1757 to 1795 and sold for the princely sum of two shillings and sixpence.

For centuries Covent Garden had been the largest fruit, vegetable and flower market in London and was immortalised by George Bernard Shaw in his play ‘Pygmalion’, which later sprung the musical and film ‘My Fair Lady’. In 1974 the old market was moved to Nine Elms just a few miles away south of the river and is now known as the New Covent Garden Market. There is still a market in the north hall of the original market building and in the large Jubilee Market on the South Piazza, where you can purchase a variety of merchandise from antiques to craft items, depending on the day of the week.

There is so much more to Covent Garden than this brief tour in and around the Piazza. The whole area stretches from Shaftesbury Avenue to the north, including Seven Dials. St Martins Lane to the west, Kingsway to the east and The Strand in the south. The very first professional police service in London, ‘the Bow Street Runners’, was established in 1749 by Magistrate Henry Fielding. The world-famous Royal Opera House opened in 1732, with its own café and bar terraces overlooking the Piazza and beyond. In Great Queen Street is the very impressive Art Deco Freemasons Hall. 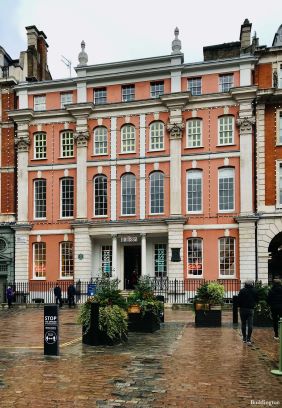 A particularly interesting building on the north Piazza is the Baroque mansion adjacent to the church known as Russell house (43 King Street). Built in 1716 as a private dwelling, it eventually became a hotel and pleasure garden. At one time it was the headquarters of the British Institute of Architects. During the 19th century it was the home of the National Sporting Club, a boxing arena and music hall. In the late 1960s the basement was used as a psychedelic music venue called ‘The Middle Earth Club’ where rock bands such as Pink Floyd, Jefferson Airplane and The Who regularly performed. The front of the building was at one time tragically carved out by the then owners to allow vehicles to drive through carrying produce to their warehouses at the rear. It has now been beautifully restored with luxury apartments and a fashionable clothing outlet.

There is much more information available online and in books about the history of Covent Garden for those wishing to explore more. Covent Garden is one of the most atmospheric and joyful corners of London and the reason millions of people from all over the world return year after year.